Renewable, solidary and of quality

The country's companies promote and strengthen an electric model based on sustainability, equal access and national security, taking advantage of natural resources in complete harmony with the environment.

This allows Costa Rica to have coverage of 99,43% that places it as the second with the highest penetration in Latin America. 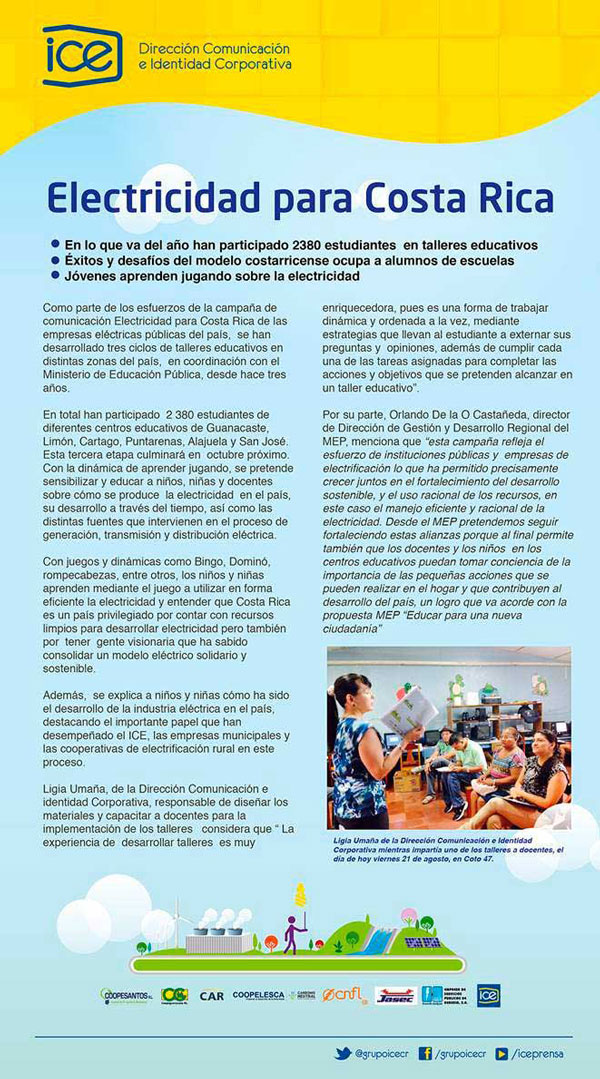 As part of the efforts of the Electricity for Costa Rica communication campaign of the country's public electricity companies, three cycles of educational workshops have been developed in different areas of the country, in coordination with the Ministry of Public Education, for three years.

In total, 2 380 students from different schools in Guanacaste, Limón, Cartago, Puntarenas, Alajuela and San José have participated. This third stage will end next October. With the dynamics of learning while playing, the aim is to sensitize and educate children and teachers about how electricity is produced in the country, its development over time, as well as the different sources involved in the process of generation, transmission and electrical distribution.

With games and dynamics such as Bingo, Domino, puzzles, among others, children learn through the game to use electricity efficiently and understand that Costa Rica is a privileged country for having clean resources to develop electricity but also for having Visionary people who have known how to consolidate a solidary and sustainable electric model.

In addition, it explains to children how the development of the electricity industry in the country has been, highlighting the important role played by ICE, municipal companies and rural electrification cooperatives in this process.

Ligia Umaña, from the Communication and Corporate Identity Division, responsible for designing the materials and training teachers for the implementation of the workshops, considers that "The experience of developing workshops is very enriching, since it is a dynamic and orderly way of working at the same time , through strategies that lead the student to express their questions and opinions, in addition to fulfilling each of the tasks assigned to complete the actions and objectives that are intended to be achieved in an educational workshop. "

For his part, Orlando De la O Castañeda, director of Management and Regional Development of the MEP, mentions that "this campaign reflects the efforts of public institutions and electrification companies which has allowed us to grow together in the strengthening of sustainable development, and the rational use of resources, in this case the efficient and rational management of electricity. From the MEP we intend to continue strengthening these partnerships because in the end it also allows teachers and children in schools to become aware of the importance of small actions that can be carried out in the home and that contribute to the development of the country, an achievement which is consistent with the MEP proposal "Educate for a new citizenship"

Within the framework of the joint communication effort developed by ICE, CNFL, JASEC, ESPH and the rural electrification cooperatives Coopesantos, Coopelesca, Copealfaroruiz, Coopeguanacaste and Coopesantos, regarding the electrical situation of the country, officials of these companies have been participating in spaces of discussion on the subject.

The radio and television channels of these companies have been part of the media that deals with issues related to the generation, transmission and distribution of electricity in Costa Rica. Soon, will participate in the program This week, Channel 13, led by journalist Allan Trigueros. In this opportunity, Mr. Javier Orozco and Mr. Elbert Durán from ICE will attend; Miguel Gómez, manager of Coopeguanacaste, and Erick Rojas, manager of Conelecicas (a consortium that brings together rural electrification cooperatives).

For Javier Orozco, director of the National Center for Electrical Planning and Development, the electric model has been successful for several reasons. The first: the effort Costa Ricas made at the beginning of the 20th century to improve education allowed the country to have people prepared to face important technological and organizational challenges, and the second, because the electrical development, since the middle of the last century, It has been in the hands of Costa Ricans both in the planning and in the construction and operation of the plants.

Erick Rojas, manager of Conelecicas, believes that the fact that the model has been successful, attracts the interest of other actors who now seek to take advantage of it to profit and that, for some years now, project proposals have been presented. law that seeks to change this model by giving participation to other actors that would come to take advantage of the investments that Costa Ricans have made.

Elbert Durán, Director of Communication and Corporate Identity at ICE, believes that alliances and the understanding of electric companies and rural electrification cooperatives should be strengthened to strengthen our current electric model and that Costa Ricans can continue to enjoy a non-profit public service of profit, solidarity and quality, according to a society that is based on institutionality as a bulwark for its social and economic development.

With 99,4% of electricity coverage, Costa Rica is shown to the world as one of the countries with the greatest coverage, and best of all, with an exceptional matrix where the 95% on average of power generation is made from energy renewable. Water, steam from the earth, sun and biomass are the raw material for the public electricity companies in the country to offer electricity services with the highest quality indexes. The term resource is used as a source of support, since all renewable sources, except the heat of the earth, depend on the climate.